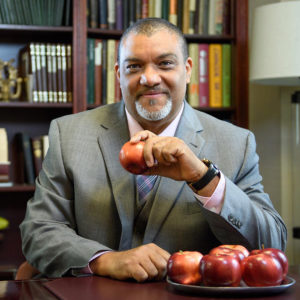 Dr. Wright began his tenure as Dean of CAHNRS in June 2018. He comes to WSU from the University of Arizona, where he was an endowed Professor and Director of the School of Animal and Comparative Biomedical Sciences. Before joining the faculty at UA, he served as Chair of the Department of Animal Science at the University of Vermont, and Director of the Vermont Dairy Center of Excellence.

For nearly two decades, Dr. Wright has been developing strategies to increase the efficiency of nutrient utilization in livestock and to raise the level of production of food in an ecologically sustainable way (i.e., decrease enteric methane). Several years ago, his research interests expanded to also include human gut microbiology. Dr. Wright’s internationally recognized research uses next-generation sequencing and bioinformatics to examine the gut microbiome of animals, including humans, to better understand the interactions between host genetics and immune responses with their gut microbiota.

Dr. Wright received his Ph.D. from the University of Guelph in Canada and holds several professional accreditations, including Member of the American College of Gastroenterology. He has published 110 peer-reviewed papers, contributed 18 book chapters, presented 100 conference papers, and delivered 34 plenary lectures in 10 countries. Dr. Wright currently serves on several national boards and has served on review panels for the USDA, NSF, and NASA. He has also served as an external scientific reviewer for the governments of Canada, Russia, Kazakhstan, Scotland, and Switzerland, and in 2008, he had a ciliated protozoan named after him, Apokeronopsis wrightii, in recognition of his contributions to microbiology.