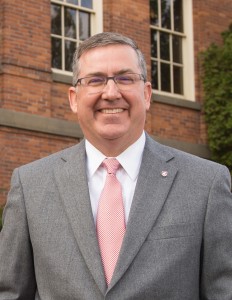 Kirk Schulz is the President and a professor of chemical engineering at Washington State University.Prior WSU, Dr. Schulz was President of Kansas State University from 2009 – 2016. During his seven year tenure he increased research activity, enrollment, and funding for Kansas State, while building the school’s athletic and alumni programs. He also secured funding for the construction of the National Bio and Agro-defense Facility by working with the Kansas congressional delegation, office of the Governor, and Kansas legislature. Schulz has also served in various academic and leadership positions at Mississippi State University, Michigan Technological University, and the University of North Dakota.

Schulz is active in the Boy Scouts of America, and has been recognized for service and patriotism by the Topeka Military Order of World Wars, as well as the Discovery Center Foundation for Kansas State University’s support of the Konza Prairie. He is also the recipient of the Chief Executive Leadership Award from the Council for the Advancement and Support of Education.

He is married to Dr. Noel Nunnally Schulz, associate dean for research and graduate programs in the College of Engineering and the Paslay Professor of Electrical Engineering at Kansas State University. They have two sons, Andrew and Tim.