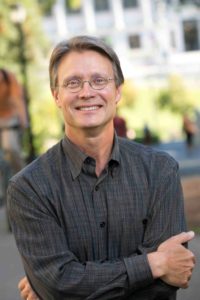 Mark Richards was appointed provost and executive vice president for academic affairs July 1, 2018. Richards will also hold a faculty appointment in the Department of Earth and Space Sciences in the UW’s College of the Environment. Prior to his appointment, he taught of Earth and planetary science at the University of California, Berkeley, where he previously served as dean of mathematical and physical sciences from 2002 to 2014, and simultaneously as executive dean of the College of Letters and Science from 2006 to 2014.

Richards taught courses at all levels, including an experimental course on the subject of “Time” as part of UC Berkeley’s Big Ideas Courses, a program he helped establish as executive dean of Letters and Science. He also worked to establish Berkeley’s Teaching Excellence Colloquium, which is now required of all new faculty, and collaborated with Berkeley’s graduate and undergraduate student associations to establish the UC system’s first academic honor code.

Richards’ research is focused on dynamic processes in the interior of the Earth and the terrestrial planets, and how these processes affect geological phenomena such as plate tectonics and volcanic eruptions. His work includes observational, experimental and computational methods. Richards is currently leading an international team exploring the enormous Deccan Traps volcanic eruptions in India 66 million years ago, which coincided with the great Chicxulub (Yucatán, Mexico) meteor impact and the mass extinction.

In addition to full-time teaching and research at UC Berkeley, Richards served as Berkeley’s special assistant for diversity in the mathematical and physical sciences. He is the principal investigator on several major federal and private foundation grants supporting STEM diversity and created the California Alliance program – an NSF-supported collaboration among Berkeley, Stanford, Caltech and UCLA to promote diversity among Ph.D. students, postdocs and faculty in the STEM fields. For this work he has received Berkeley’s two highest awards for contributions to diversity: The Academic Senate’s Leon Henkin Citation, and the Chancellor’s Award for Advancing Institutional Excellence.

After receiving his bachelor’s degree in engineering from the University of Texas at Austin, Richards earned his master’s in applied physics and a Ph.D. in geophysics from Caltech, followed by a postdoc at the Australian National University. He served on the faculties of the University of Oregon and, in 1993, at the UW, and has been at Berkeley for most of his academic career.