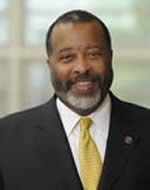 Dr. Michael J. Tate served as assistant to the Provost/Executive Vice President and chief diversity officer for Washington State University (WSU) from 2010 – 2014. Until his retirement in 2014, he was also an extension professor in the Department of Human Development.

Prior to his work at WSU, Dr. Tate served as Assistant Director of Extension at Michigan State University. He has more than 30 years of combined experience as an extension educator and administrator.

Dr. Tate currently serves as a commissioner on the Governor’s Commission for African American Affairs, a position he has held since 2006. He is also a founding board member for the Ruckelshaus Center, an organization dedicated to finding agreement and developing policies pertaining to areas such as sustainable development, environment, natural resources and agriculture. While in Michigan he held leadership positions for several high-profile organizations such as the Michigan Nonprofit Association and the Michigan Community Service Commission. In 1997 he served as a delegate for the President’s Summit for America’s Future held in Philadelphia, PA.

Tate’s education includes three degrees from Michigan State University; a bachelor of science in food science and human nutrition in 1972, a master’s in adult and continuing education in 1982 and a doctorate in extension education and administration in 1996.

His awards include a U.S. Department of Agriculture Superior Service award, an Epsilon Sigma Phi Certificate of Meritorious Service and a National 4-H Distinguished Service Award.

A native of Detroit, Dr. Tate is married and has two children and two grandchildren.