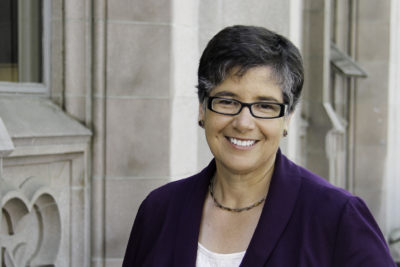 Born in Cuba, where her father was the minister of education, Interim UW President Cauce left Cuba with her family during the revolution, when she was 3 years old. She grew up in Miami, where both her parents took jobs in shoe factories, hoping they could return to Cuba. Both placed a very high value on the power of education.

Cauce is professor of psychology and American ethnic studies. She holds adjunct professor appointments in the department of Gender, Women, and Sexuality Studies, and the College of Education. She has held numerous leadership positions at the UW, including director of the UW Honors Program, chair of American Ethnic Studies, chair of Psychology, executive vice provost, and dean of the College of Arts and Sciences.

From 2012 to 2015, prior to being appointed interim president, she served as the University’s executive vice president and provost, the chief academic officer, responsible for overseeing the education, research and service missions in the University’s schools, colleges and other academic units, including Academic and Student Affairs. As the UW’s chief budgetary officer, she was responsible for resource allocations and worked closely with the president on strategic planning and long-term decision-making.

Cauce maintains an active research program, focusing on adolescent development, with a special emphasis on at-risk youth. She is also active in encouraging women and underrepresented minorities to pursue careers in science, technology, engineering and mathematics. She has received numerous awards for her scholarship, teaching and activism, including the much-prized University of Washington Distinguished Teaching Award. She remains active in the classroom and continues to teach and mentor undergraduate and graduate students.