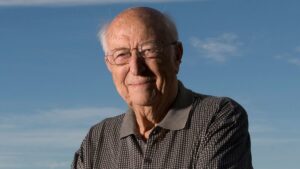 September 14, 2020 – We are so sorry to report the passing of another founding member of the Ruckelshaus Center’s Advisory Board in Bill Gates, Sr. We lost Bill Ruckelshaus in November; Jack Creighton in January; Slade Gorton in August; and now Bill Gates, Sr. That is way too many emeritus Board members lost in way too short a period of time. But it also provides us with an opportunity to reflect on how incredibly fortunate the Center has been to have grown up under the wise counsel and tutelage of such a remarkable group of advisors.

And Bill Gates, Sr. was among the most remarkable. As remembrances of him flood the media, we are sure you will see certain themes echoed frequently. One will be that he was tall. And yes, he was 6’6” tall. But he never “loomed large” in conversation, instead always somehow finding a way to make sure there was room for everyone to contribute to the dialogue, no matter their physical stature. Another will be how smart he was. And yes, he was whip-smart, typically thinking several steps ahead of the rest of us, connecting dots we had yet to even recognize as dots. But he never needed that intelligence acknowledged for his own sake. He put it to work in service of a common goal. Other themes will be that he was gentle, kind, caring, and that he dedicated much of his time on this earth to serving others. We have nothing to add to those but “yes.”

It is fair to say that the Ruckelshaus Center would not have achieved nearly as much as it has to benefit our state and region without the steadfast support of the Bill and Melinda Gates Foundation, and that the Foundation’s commitment to the Center derived from Bill Gates, Sr.’s clear and complete understanding of and dedication to our mission, from day one. For that we will be forever grateful.

With fond remembrance, and condolences to the Gates family,