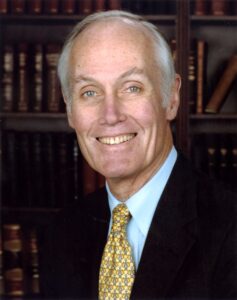 We are greatly saddened to learn of the passing of a stalwart member of the Ruckelshaus Center Advisory Board in Senator Slade Gorton. Senator Gorton has been a member of the Board since the Center’s founding, and none of us can recall him missing a single meeting over the Center’s 16-year history, until this year.

At each of those meetings, he mostly listened attentively, never needing to dominate the conversation or hear the sound of his own voice. But there always came a moment where he spoke up and interjected a wisdom that was earned over decades of experience, but also derived from an innate ability to see through to the heart of the matter.

The Ruckelshaus Center loved co-hosting a Statespersonship Series with the Slade Gorton International Policy Center. One of the characteristics of a true statesperson is patience. Senator Gorton certainly had that characteristic. One example—he and Michael shared a passion for baseball, and therefore have commiserated through the Seattle Mariners’ 20-year playoff drought. But Senator Gorton was also a Chicago Cubs fan, having grown up in that part of the country. He told Michael in 2016, “I think this is the year. It’s been 108 years since the Cubs won the World Series, and there are 108 stitches on a baseball.” And he was right! After 108 years (almost 90 of which he experienced himself), his Cubs won the Series. Now, that’s true patience!

So maybe in the crazy year that is 2020, his other team, the Mariners, will win it all for Senator Gorton. Wouldn’t that be something? Whatever happens, all of us at the Center will dearly miss our valued colleague, who we are pleased to announce will be added to our Emeritus Board.

With fond remembrance and condolences to his family,