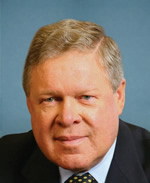 Norm Dicks, a native of Bremerton, WA, was elected to Congress November 1976.

After his success as both a student and star linebacker at the University of Washington, Norm continued on to earn a Juris Doctorate at the University of Washington. After graduation, he joined US Senator Warren G. Magnuson’s staff and served as the Senator’s top aide. In 1976, Norm left Senator Magnuson’s office to begin what was a successful campaign for Congress in Washington State’s 6th Congressional District. He retired from Congress after 18 terms at the end of the 112th Congress in January 2013.

The environment was always a high priority for Norm, who served on the Interior Appropriations Subcommittee during most of his tenure in Congress. One of his most significant environmental achievements came in September, 2000, when Norm wrote a landmark bill that created a new federal lands conservation trust. The bill doubled the nation’s commitment to preserving threatened parklands and protecting wildlife over a six year period. In 2007, Norm became Chairman of the Interior Appropriations Subcommittee and he immediately launched an effort to restore funding for the operations accounts of America’s National Parks, which had suffered from years of constrained budgets that, in his view, diminished the visitor experience at many of the park units. As Chairman he also helped to increase support for the EPA’s research and remedial efforts to restore major estuaries around the United State, including Puget Sound. In 2009, Norm helped secure an additional $50 million for the clean-up of Puget Sound. He was also instrumental in securing funds to speed up the Elwha Dam removal, creating hundreds of jobs in Washington State.