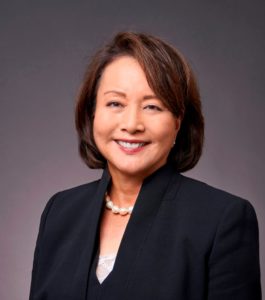 Previously, Phyllis served as the President/CEO of The Seattle Foundation, the largest community foundation in Washington. During her tenure, the Foundation doubled in charitable assets, to $600 million. Prior to that, Phyllis was the President/CEO of U.S. Bank of Washington for over six years.  Under her leadership, the Bank doubled in size, through customer-focused growth initiatives and acquisitions.

Phyllis has a proven track record of board service, both in the for profit and not-for-profit sectors. She is an independent director for Alaska Air Group, a NYSE listed company. She served on the Nordstrom board of directors from 2005-2016 and chaired the Audit Committee for seven years. She currently serves on the Diversity Advisory Board (DAB) of Toyota. Phyllis is the chairman of the US-Japan Council, and serves on the global advisory board of Women Corporate Directors (WCD), among others. She formerly served on the board of directors for PATH. She is a member of the NACD Governance National Advisory Council. She is a frequently requested speaker on governance, audit and risk-related topics and has spoken at a number of global conferences.

Her awards have included the following: In 2016, she was recognized as the “First Citizen” of Seattle/King County. In 2015, she was awarded the Lifetime Achievement Award by Seattle Business Magazine and the Rev. Dr. Martin Luther King Jr. Vision from the Mountaintop Award.  She also was the Pinnacle Award recipient of the 2015 Outstanding 50 Asian Americans in Business Awards.  In 2014, she was recognized by the National Association of Corporate Directors (NACD) as a “Top 100” Director, as chosen by a committee of her peers and The Ascend/Deloitte Inspirational Award. She was the inaugural NACD Director of the Year Award from the Pacific Northwest chapter, Top Women in Finance Award from Women of Color Magazine in 2010 and Woman Who Makes A Difference Award from the International Women’s Forum. She was also awarded the 36th Regents’ Distinguished Alumnus Award from Washington State University.