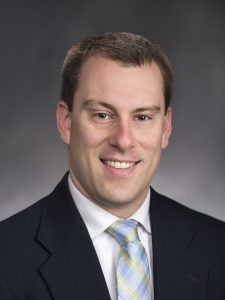 State Senator Hans Zeiger represents the 25th Legislative District, covering central Pierce County. During his time in the legislature, Hans has been a champion for completion of Highway 167 from Puyallup to the Port of Tacoma, a leader in education policy and in addressing homelessness, and a proponent of bipartisanship and collaboration. Hans was recognized as the co-recipient of the Gabrielle Giffords Award for Civility in State Governance by the National Institute for Civil Discourse for his work to promote civility in the Washington legislature.

Hans was elected to the State House of Representatives in 2010 and reelected in 2012 and 2014, representing the 25th Legislative District. He served as the ranking Republican on the House Higher Education Committee.

Following his election to the 25th District Senate seat in 2016, Hans served as chair of the Senate Early Learning and K-12 Education Committee, working to promote civics education, bilingual education, and a key reform to the Growth Management Act to allow for the siting of schools in rural areas. He currently holds positions as ranking member on the Housing Stability and Affordability Committee and the State Government, Tribal Affairs and Elections Committee. He was recognized as legislator of the year by the Washington Council of Police and Sheriffs and as a 2019 “Legislative Champion” by the Association of Washington Cities.

Outside of the legislature, Hans serves in the Washington Air National Guard. He serves on the boards of the Washington State Historical Society, the William D. Ruckelshaus Center, and the Washington State Institute for Public Policy. He was a 2017 Leadership Fellow of the Henry M. Jackson Foundation and a 2018 Rodel Fellow of the Aspen Institute. Hans is a member of the Kiwanis Club of Puyallup. Active in local history volunteer work, he is the author of the recently-published Puyallup in World War II and co-editor of the forthcoming South Hill: A Community History.

Hans graduated from Puyallup High School and holds a bachelor’s degree from Hillsdale College and a Masters degree in Public Policy from Pepperdine University.